Amongst the spectrum of dazzling colours displayed by the baltic amber stone, one colour in particular really is quite an elusive one. And, according to Pantone, we're going to be seeing a lot more of it in 2018.

Pantone announced that its Colour of the Year 2018 is Ultra Violet. A "dramatic, provocative and thoughtful" shade of purple. This rather celestial shade is much associated with magic, mystery and royalty; whilst communicating a deep sense of spirituality and creative inspiration, that presents us with the optimism of a limitless future.

"We are living in a time that requires inventiveness and imagination. It is this kind of creative inspiration that is indigenous to Pantone 18-3838 ultra violet, a blue-based purple that takes our awareness and potential to a higher level.

From exploring new technologies and the greater galaxy, to artistic expression and spiritual reflection, intuitive ultra violet lights the way to what is yet to come."

Pantone began its 'Colour of the Year' selection back in 2000, predicting as an international group what will be the next big 'tinge' in the worlds of fashion, interior and accessories. Pantone expressly stated that colour "has always been an integral part of how a culture expresses the attitudes and emotions of the times."

Whilst it may be difficult to imagine a single colour reflecting the entire mood of mankind, after the world's almost backwards sociopolitical events of 2017, this non conforming promoting a new age of thinking and future development, might be just what the doctor ordered.

It's definitely interesting to note that this provocative shade has popped up at rather turbulent times throughout history. It was the favorite color of the Fauvists of the twentieth century, of musicians such as Jimi Hendrix & Deep Purple at the height of the countercultural movement, and of the Women's Suffrage movement itself. Is Ultra Violet a cultural prediction of what we can expect from 2018? Looking back at 2017, shades of purple have been popping up everywhere in the fashion world. Hillary Clinton donned Ralph Lauren's purple hued trousers to concede defeat to Donald Trump. June 2017 saw the post humous release of Purple Rain Deluxe Expanded by the King of purple himself, Prince. Gucci's SS18 collection, Balenciaga and Moschino, all pushed the UV tones down the catwalk in 2017.

"There's enough blue there, that while it's provocative and stands out, there's still a stability, and there's such a versatility to this shade that it can go with so many other different colors. People are exploring and experimenting and looking for something that's original."

Whilst it may be described as versatile, it's sudden re-entry into the fashion world may leave some perplexed on how best to style this regal shade. By far the easiest way, is to use it sparingly to accent your usual look. Just like with Pantone's Colour of the Year 2017, Cherry Red Baltic Amber also makes up a very small amount of natural amber found across the Baltic Sea. And whilst it can occur naturally, it can also be created through gentle heat manipulation a natural amber stone. This cherry red shade varies heavily from a deep reddened cognac to UV purple to almost black. This versatility of Amber makes it the perfect accessory to style all year around. With its spectrum of dazzling colours, it eagerly awaits Pantone's next chosen colour, to add something unique to each year's much-anticipated trend. 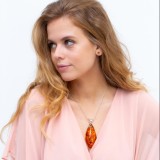 Passionate writer, ring addict and the creative eye behind the Baltic Beauty Blog.